For thousands of years, somewhere around the world, music has been enjoyed with all its glory and magnificence.

As a Music lover of all styles without borders, I “Behnam Khodarahmi” would like to reiterate: One of the very oldest styles of Music, developing since ancient times, has been Persian classical Music. In simple terms, this brings together reflections of the pains, sufferings, and feelings of great pleasure within a multi-faceted civilization.
For thousands of years Persian Classical Music has continued to be passed on from generation to generation and from language to language. The simpler, more pleasant, as well as easy-to- understand parts of this Style continue to this day.
Persian Classical Music has been influenced over many centuries by Styles of music from numerous regions such as Central Asian nations, Pakistan, Afghanistan, Armenia, Azerbaijan, Greece, and Turkey; each one has contributed to its development.
The essence of Persian Classical Music is improvisation, introduced as “Radif”. This has led to a collection of melodious figures in this style of Music, relatively equivalent to the word “repertoire” in Western Music.
The music of Persia is thus developing day by day in a variety of genres, including Classical, Pop, Folk, and of course, sometimes Rock and Jazz across the world… 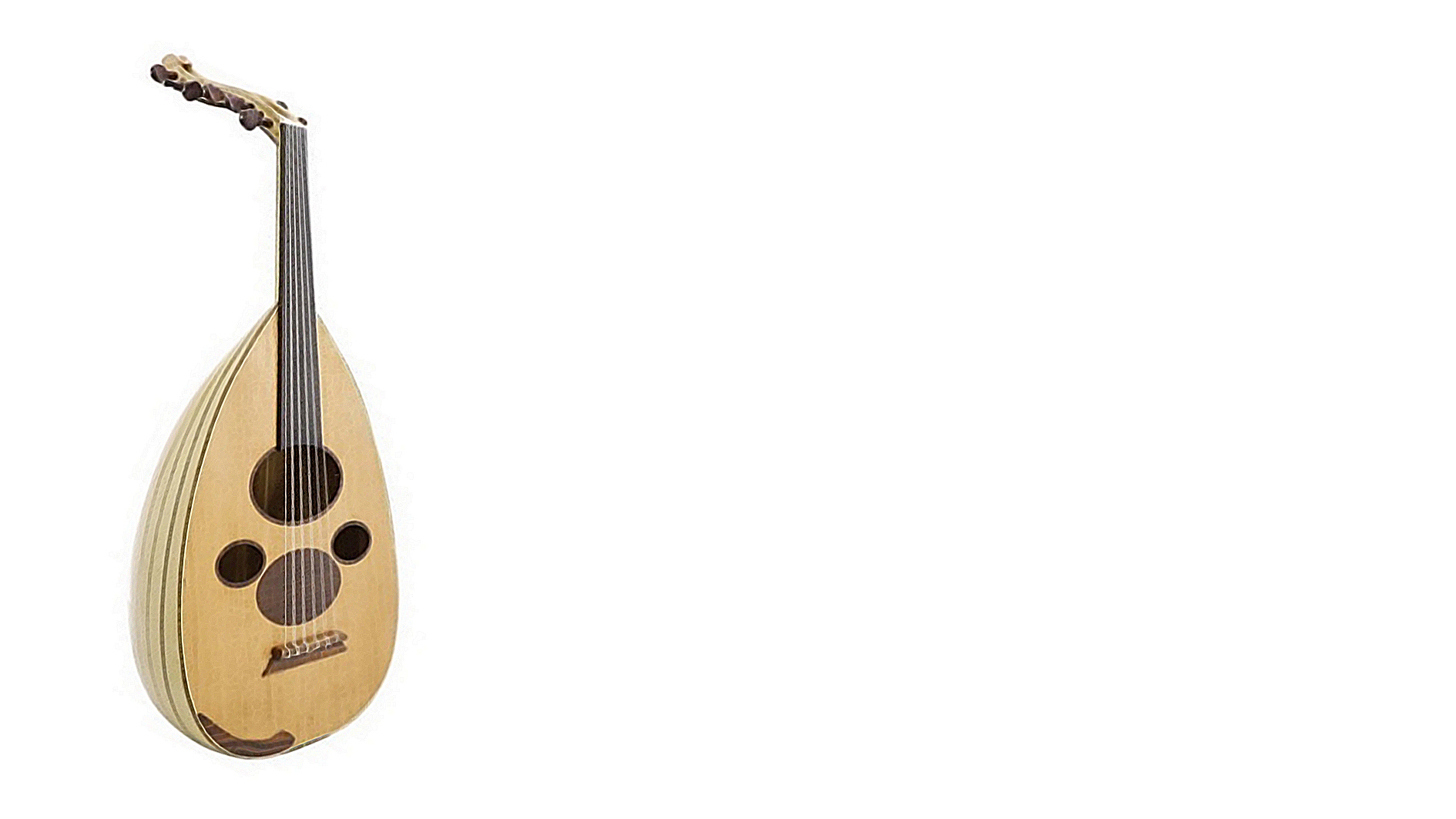 Barbat (Oud) is a short-neck lute-type, pear-shaped stringed instrument, usually with 11 strings grouped in 6 courses, but some models have 5 or 7 courses, with 10 or 13 strings respectively.

Barbat is very similar to modern lutes, and also to Western lutes.

The modern Barbat is most likely derived from the Assyrian Lute.

Similar instruments have been used in the Middle East, North Africa, and Central Asia for thousands of years, including Mesopotamia, Egypt,North Africa, the Caucasus,the Levant, and Balkanic countries like Greece, Albania and Bulgaria;there may even be prehistoric antecedents of the lute.The Barbat, as a fundamental difference with the western lute, has no frets and a smaller neck.

It is the direct successor of the Persian Barbat lute.

The oldest surviving Barbat is thought to be in Brussels, at the Museum of Musical Instruments.

A music scholar by the name of Eckhard Neubauer suggested that Oud may be an Arabic borrowing from the Persian word Rōd or Rūd, which meant string.

Another researcher, archaeomusicologist Richard J. Dumbrill,suggests that Rud came from

However, another theory according to Semitic language scholars, is that the Arabic oud is derived from Syriac Oud-a, meaning “wooden stick” and “burning wood” cognate to Biblical Hebrew ’Ud, referring to a stick used to stir logs in a fire.

Bactria and Gandhara became part of the Sasanian Empire (224–651).

Under the Sasanians, a short almond shaped lute from Bactria came to be called the Barbat or barbud, which was developed into the later Islamic world’s Oud or Ud.

The Oud is most likely the combination of the Barbat, with the Ancient Greek Barbiton, giving the Barbat a lower pitched tone and the playing of Maqams in Middle Eastern and Byzantine music.

When the Moors conquered Andalusia in 711, they brought their ud along, into a country that had already known a lute tradition under the Romans, the Pandura.

An Oud is depicted as being played by a seated musician in Qasr Amra of the Umayyad dynasty, one of the earliest depictions of the instrument as played in early Islamic history.

During the 8th and 9th centuries, many musicians and artists from across the Islamic world flocked to Iberia.

Among them was Abu l-Hasan Ali Ibn Nafi (789– 857) a prominent musician who had trained under Ishaq al Mawsili (d. 850) in Baghdad and was exiled to Andalusia before 833 AD. He taught and has been credited with adding a fifth string to his Oud and with establishing one of the first schools of music in Cordoba.

By the 11th century, Muslim Iberia had become a center for the manufacture of instruments.

These goods spread gradually to Provence, influencing French troubadours and Trouveres and eventually reaching the rest of Europe.

While Europe developed the lute, the Oud remained a central part of Arab music, and broader Ottoman music as well, undergoing a range of transformations.

Although the major entry of the short lute was in western Europe, leading to a variety of lute styles, the short lute entered Europe in the East as well; as early as the sixth century, the Bulgars brought the short-necked variety of the instrument called Komuz to the Balkans.

a Barbat or Barbud, a Lute indicated by Marcel-Dubois to be of Central Asian origin.

Evidence of a form of the Barbat is found in a Gandhara sculpture from the 2nd-4th centuries AD which may well have been introduced by the Kushan aristocracy, whose influence is attested in Gandharan art.

The name barbat itself meant short-necked lute in Pahlavi, the language of the Sasanian Empire, through which the instrument came west from Central Asia to the Middle East, adopted by the Persians.

The Barbat (possibly known as Mizhar, Kirān, or Muwatter, all skin topped versions) was used by some Arabs in the sixth century.

At the end of the 6th century, a wood topped version of the Persian-styled instrument was constructed by al Nadr, called “ūd”, and introduced from Iraq to Mecca.

This Persian-style instrument was being played there in the seventh century.

Sometime in the seventh century it was modified or “perfected” by Mansour Zalzal, and the two instruments (Barbat and “ūd Shabbūt”) were used side by side into the 10th century, and possibly longer.

The two instruments have been confused by modern scholars looking for examples, and some of the Ouds identified may possibly be Barbats.

Examples of this cited in the Encyclopedia of Islam include a lute in the Cantigas of Islam and the frontispiece from The Life and Times of Ali Ibn ISA by Harold Bowen.

The oldest pictorial record of a short-necked lute-type Vīnā around the 1st to 3rd centuries AD.The site of origin of the Oud seems to be Central Asia.

The ancestor of the Oud, the barbat was in use in pre-Islamic Persia. Since the Safavid period, and perhaps because of the name shift from Barbat to Oud, the instrument gradually lost favor with musicians.